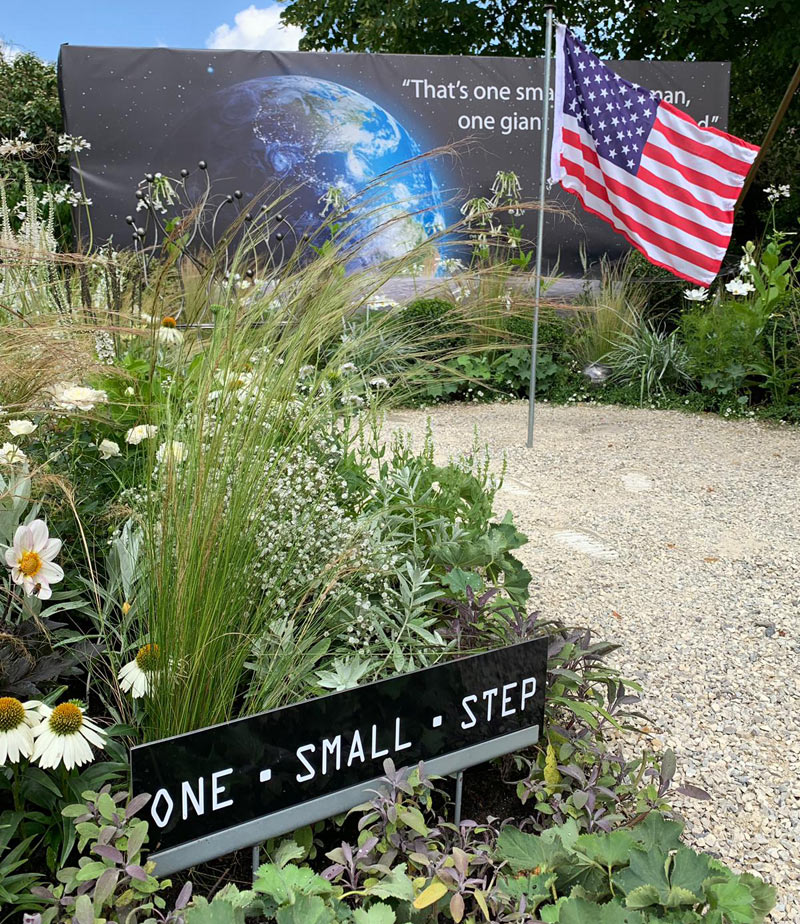 What a great time we had at this year’s Taunton Flower Show. In January I started to think about the design for my show garden. I did some research and discovered that in July it would be the 50th Anniversary of the moon landing – such an incredible achievement for mankind, and I thought this would make a perfect theme for my garden.

The design was simple; the centre circle represented the moon surface, I used a product called self-binda gravel which was kindly supplied by the Allgreen Group of Yeovil and was just perfect for the job. In the centre of the circle I placed the American flag which I wired so it looked like it was flying just like the original back in 1969.

Around the outside of the circle I used a combination of green, silver and white planting that included Echinacea ‘White Swan’, Veronicastrum virginicum ‘Album’, Cosmos ‘Purity’, Lysimachia ‘dethroides’, and Artemesia ‘Valerie Finns’ to create my interpretation of the atmosphere of the moon, and I used buxus balls to represent the planets.

The plants were supplied by Dayspring Plants of Exeter and were top quality as always – well done Peter and his team!

We placed a gorgeous metal bench within the planting, the design of which fitted in perfectly with the circular theme. The bench, metal spheres, and the ring around the buxus ball to represent the planet Saturn, were kindly supplied by Kevin Andrews of The Metal Workshop based in Yeovil – I lost count of the number of people that admired the bench and I believe that as a result of the show he had several commissions!

The back drop for the garden was a banner printed with a digital photograph of earth taken from the moon. It was 4 meters wide by 2 meters high and gave a dramatic feel to the garden, and on it were the iconic words by Neil Armstrong ‘That’s one small step for man, one giant leap for mankind’.

The banner will be put to good use now the show is over; we plan to donate it to East Coker Primary School to inspire future generations to reach for the stars.

The garden would not have been complete without those first footsteps made by the astronauts in the dust. A friend of my husband, Pat Skinner who is a fantastic carpenter, made a mould from MDF so we could cast the footprints in concrete courtesy of my friends at Sherborne Garden Angels, and they looked great!

Many thanks again to all my sponsors and supporters who helped to build the garden: Everys Solicitors, GSL who built the structure for the garden, Dayspring Plants, Marine Investments Ltd UK, The Metal Workshop, AllGreen Group, Yeovil, Mr and Mrs Griffiths (mum and dad), and finally my wonderful husband Andrew who planted every single one of the 254 plants!

We were awarded a silver gilt for our garden but more important than that, we won The Peoples’ Choice Award.